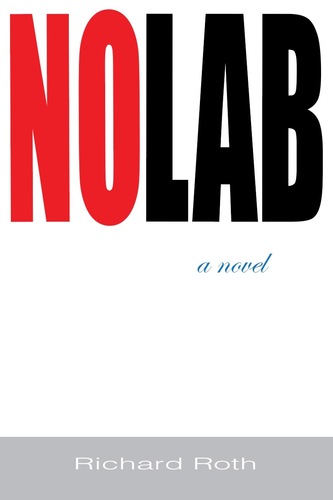 NoLab is available from Owl Canyon Press, Amazon, Kindle, and Nook, it is also available as an audiobook from Audible.

Honors for NoLab:
FINALIST for the 2019 BLUE MOUNTAIN NOVEL AWARD

“NoLab has it all: Art, Life, Death, and Love. In that order.”
— Ryan McGinness

"I read the entire novel on my cell phone on the train from New York to Richmond (two cities  prominent in the plot), so absorbed in the story that when I looked up, day had turned to night and three hundred miles had flashed by under my feet. With a plot that spins across continents, bedrooms, dive bars, off-grid enclaves, and the Web, NoLab is an art world thriller in a fast and furious 230 pages. Three artists, whose collaboration 'The Church of the Holy Spiral' had spiraled into mail fraud, take on a mysterious new project that lands them in aesthetic and political terra incognita, and their two former professors are hired on the q.t. to find them. Roth's legendary wit as both artist and teacher—unforgettable to the legions of students, colleagues, critics, collectors, and curators who have encountered him in the real world—are sublimated into a roll call of heroines and rogues who voice the tech-slang of our globally mediated moment. Dialogue is so spot-on you mouth-read the lines. Hacking, poker, surveillance drones, genetic mutation, pharmaceuticals, and a cross-country race against time—and Roth's characters still manage to fall in love, spoof an art theory lecture, deliver a passionate art manifesto, update the old painting vs. sculpture duel, and extoll the glory of Formica. Fictional persons (along with illnesses, buildings, and governments) mingle Pynchon-style with real ones well-known to anyone on Twitter. What begins as brilliant shtick tips into drama and finally shock, and the reader discovers she suddenly cares for these characters. It is as if this tale was waiting to be told, (to quote Kafka) rolling in ecstasy at Roth's feet. The story echoes the slipping of trust and truth in our national life. Roth makes us laugh, but he touches a nerve."
—Elizabeth King

“NoLab is a brilliantly inventive comic novel custom-built for an age that pays homage to Warhol’s radical claim that art is what you can get away with. Can artists get away with eliminating art works altogether? Does terrorism count as performance art? What if a pill could reproduce the experience of viewing Picasso’s Guernica? Will we still need Guernica? Richard Roth is a rare triple threat: an internationally-known artist, former chair of a prominent department of painting, and—now—an incisive, droll, ingenious novelist. NoLab unfolds through the bizarre adventures of characters who live on the cutting edge of art and ideas.”
—David B. Morris, author of The Culture of Pain & Civil War Duet

In Roth’s debut mystery, two artists attempt to track down a missing trio of young provocateurs.

It’s 2016, and Ray Lawson has settled down after years of making provocative art. Back in 1998, he was escorted out of his exhibition in handcuffs and charged with “practicing medicine without a license” as part of an art project. Nitro, the first exhibition, was comprised of eight specially made pills. “Each pill was a miniature work of art designed to alter perception,” Ray recalls. He refers to a rave review of Nitro in the New York Times in which the critic stated that the exhibit “would make [Dadaist artist Marcel] Duchamp smile.” Now, Ray says, he’s left the “fray” and returned to painting. He teaches at Columbia University and enjoys the relative quiet of his faded celebrity—until an acquaintance from the past interrupts it: Stuart “Pinky” Goldstone, the father of one of Ray’s former grad students. Jeff, Pinky’s son, was a founder of the NoLab art collective, which devoutly followed Ray’s work and created their own impish art projects. Now Jeff and the other two members of NoLab are missing. Pinky pays Ray to look into it, and Ray enlists fellow artist Victor in the sleuthing. Their investigation leads them to the Institute, a cutting-edge arts organization outside of Columbus, Ohio. As Victor and Ray keep digging, NoLab’s latest project takes shape—a project bound to upset some very powerful people. Roth’s novel is at once a sendup and a loving portrait of the fine-art world, and it moves quickly. At the same time, however, it effectively gives Ray time to reflect, and these moments are the highlight of the book. As a narrator, Ray proves to be an eloquent guide: “I never tired of what I witnessed on those streets,” he says of New York City. “Lower Manhattan was my Yosemite, my Galapagos, my Sahara. My La Scala, my Prado, my Bodleian. Every day was a revelation.” Of painting, he observes: “It now seems absurd to me that the one culture I flatly rejected was my own, the one I labored in for so long and knew so much about.”

A lively satire, a loving homage, and a satisfying whodunit.

—Kirkus Reviews
Richard Roth is an artist and a writer. His paintings have been widely exhibited nationally and internationally. He received an MFA from Tyler School of Art, a BFA from The Cooper Union, and was the recipient of a Visual Artists Fellowship in Painting from the National Endowment for the Arts. He co-edited the book, Beauty is Nowhere: Ethical Issues in Art and Design (Routledge) and co-authored Color Basics, and Design Basics 3D (Wadsworth/Cengage). Roth is a Virginia Commonwealth University Professor Emeritus; he chaired the VCU Department of Painting and Printmaking from 1999 - 2008. He also taught at The Ohio State University; the Birmingham Institute of Art and Design, U.K.; the University of California, Berkeley; New York University; and the School of the Art Institute of Chicago. Born in Brooklyn, he presently lives and works in Southern California.